Heat it to Beat It: Meeting Other Survivors

I am frequently asked if I know any long term survivors of appendix cancer besides myself.  Well, since I’ve started this non-profit in 2008, I have been in contact with over 2000 newly diagnosed appendix cancer patients, I think it’s actually closer to 3000.  But most contact me when they are diagnosed and I communicate with them through their surgery and their return to normal life, but after awhile most stop communicating with me. So I  don’t know how long they’ve survived even though I’ve been doing this for 10 years.  I have met many long term survivors in Baltimore Maryland, though, where renowned appendix cancer specialist Dr. Armando Sardi hosts a 2.2 or 1.1 mile walk (now it’s in the Baltimore Zoo!!) called Heat it to Beat It, referring to heated intraperitoneal chemotherapy.   It is a wonderful way of meeting other survivors!  I went for the first five years, I was there at it’s inception, but have missed the last three.  I AM going this year though!!!   I will also represent this organization there.

Heat it to Beat it is a WONDERFUL experience!  There are several organizations there, including my own, that are non-profits devoted to appendix cancer.  Dr. Sardi always has a wonderful presentation, the walk is beautiful and there is great food offered.   Most of all, though, you get to see and meet hundreds of people who have been diagnosed with and survived appendix cancer.  It is so inspiring!  There is also a reception the night before the walk.

If you want to register for the walk, I started a team for this organization.  If you sign up, register for the team Appendix Cancer Connection.  You don’t have to donate any money, your registration fee is your contribution for our team.  You can donate more if you want, but I would never expect that, we all have lots of medical bills.  This is the link to register: Heat it to Beat It.    I’m doing it cheaply this year!  I got a $95 flight on Southwest by letting them send me their credit card, which I don’t need to keep if I don’t want, just pay the $95 bill.  I am also, for an adventure, staying in this hostel, the HI Baltimore hostel, and not a hotel!  It’s only $30 a night and has great ratings!  I’ve only stayed in a hostel once before when backpacking the Appalachian Trail, and that was actually my best experience on the hike because of the great people I met.  So I’ll stay there for 2 nights.   If any of you come to the walk and want to stay in the hostel with me, that would be great!

Below I have a picture of the beginning of the walk in 2011.  Again, it is a GREAT experience and I would love to see you there!  And you would meet so many other survivors and leave with a great sense of hope! 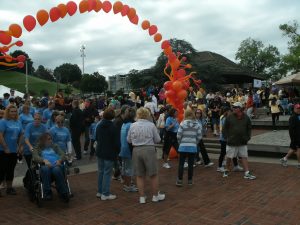 It’s supposed to be springtime, but it’s a bit late coming this year!  We are supposed to have twelve hours of snow starting tonight, though it’s not supposed to accumulate.  But the grocery stores and gas stations were really busy today!  I’ve always thought of springtime as a time of new beginnings.  I personally prefer, if I am going to make New Year’s Resolutions, to make them on May first!   It a time when all that was dead comes back to life, when the world is again filled with color.

This year I’d like to lose a little weight and get in shape to go backpacking and biking!  Last year I did a bicycle century, rode my bike 100 miles in a day.  I did that once before, six month after I completed chemo. I did trained for it while I was on chemo!

I was asked again today what I did differently after my cancer diagnosis.  Did I live my life differently, did I change my diet?  The answer is no, I lived my life after cancer exactly as I had before cancer.  I did then and still do now sometimes eat fast food.  I still occasionally eat junk food, and did right after my cancer diagnosis and treatment.  I rode my bike a lot after the cancer diagnosis, but that was kind of my emotional outlet, when I felt scared  or stressed I rode my bike.  I remember on a bad day riding my bike in the rain when it was only 40 degrees!  I smoked when I was diagnosed with cancer, and didn’t quit until 2 years after my diagnosis….getting diagnosed with cancer makes it very hard to quit smoking if that’s how you deal with stress!  So I did nothing “magic”: to survive Stage IV signet ring cancer for so many years.  I just got good medical treatment.

I’ve had some ask me about support groups.  There are not usually in person support groups for this cancer as it is so rare.  I know of an online one, PMP Belly Button Club.  I also have forums on my new web site that I hope will become support groups.  They are for patients and families.  Those who read this blog, please try to sign p for the forums!  I’ll be there!  Maybe we can get a support group going! It is a tad tedious to sign onto the forums, but that is a good thing.  I had a forum on a previous web site that was 80% spam because it wasn’t as secure as these forums.

I hope springtime is filling you all with the sense of a new and beautiful beginnings!

Just a quick post, more later, but there are a few emails I’ve been sent that for some reason I’ve not been able to reply to, the replies bounce.  If you are someone who has not heard back form me, can you email me again?   Or you can call me!  One of you was a researcher I am very interested in communicating with.

Will be back with more soon!

Easter is a really important holiday.   I’m a Christian, but if I didn’t believe in Easter, I wouldn’t believe in Christ or the Bible or churches.   The whole point of Christianity is that death has been defeated, we will never cease to be alive, to belong, to be loved.

Of course, facing a death sentence, you delve into your spirituality.  I’d always thought of myself as Christian, but I had to delve deeper into it.  Think harder about it, KNOW what I believed.   A friend bought me a book, the Healing Power of the Christian Mind.  I don’t believe that you can cause or cure you cancer with your mind, and I don’t believe God heals everyone.  I’ve known many devout Christians who have died of cancer, who believed God would heal them, but weren’t healed.  But for some reason that book brought me peace, I read it more than once.  I don’t have a clue why, but I own two copies!  Now I can’t remember what it was about or why it helped me, but it did.

I also developed an obsession with reading books about near death experiences, my mother told me she’d had one while in her 20s when she was near death and after that was not afraid to die.  One of my favorite books about NDEs was a book by Randy Alcorn, In Light of Eternity.

When Christ was resurrected, he had a physical body that someone could touch, could hug. He still ate food.  When I die, I will get a new PHYSICAL body, that will never get sick or have cancer.  I will never struggle with my weight, my sense of smell, which I lost maybe via chemo, it will be perfect.   I’ll smell flowers again.  The bunion on my foot will be gone.  I’ll be reunited with those I’ve missed, I’ll be able to give them hugs.  Heaven will I believe be earth as it was in the beginning, perfect.   Christ in his new body was able to to instantly be in another place with no form of travel.  Will we be able to do that too?   That would mean no beauty disrupted by highways and cars and pollution.  When you read of near death experiences, many say the colors and the sense of love and the beauty they experienced couldn’t be described in any words they knew.  That there were more and better colors.    If you get a chance, read some of these books, they will give you a sense of what to hope for.  And I believe the descriptions.   I don’t believe I will be on a cloud playing a harp or be in an eternal church service when I die….I believe we will do things we love doing.

Easter means all of this to me.  It’s a gift we can choose to receive.  I am not afraid of being dead now, as much as I am afraid of dying, of maybe the pain or discomfort involved, of saying goodbye to those I love, of causing them pain.   But in a recent sermon I heard about eternity (I listened to it online :-), the minister used a garden hose long enough to stretch around the world several times, to reach to stars that were light years away as an example of eternity.  But there was a 2 foot long section of the hose that was a different color.  That section, he said, was how long our life is, just a tiny piece of the eternity of time.  Those we leave won’t miss us for long, but will be with us for eternity.