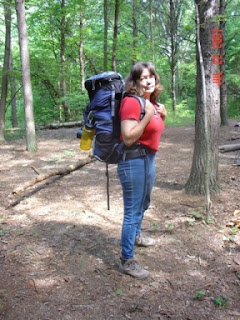 For fun I thought I’d add pictures this time. I will continue more about my kids and their response to my diagnosis later, but for now I’m going to show you some pictures of myself and my life after cancer.

I recently backpacked with a friend at the Charles Deam Wilderness, we had a lot of fun and carried about 40 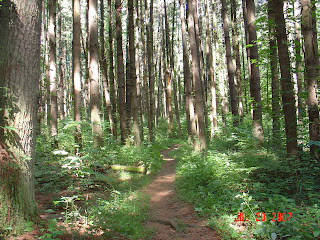 lbs. each about 10 miles a day (we are working on packing lighter!). We’d backpacked together several times before, but with a wilderness club. This was our first time backpacking without the leadership and experience of seasoned backpackers. We did great and didn’t get lost!

I’ve always appreciated nature and the out of doors, but I do more so post cancer. I especially love backpacking as it is about truly living one day at a time. We didn’t really plan where exactly we would hike or where we would camp, we just enjoyed every moment of every day. Nature (and life) at it’s best. Backpacking is a new hobby I’ve taken up since my cancer diagnosis. Since my surgery I’ve been on 4 backpacking trips, two to the Red River Gorge in Kentucky, once to the Appalachian Trail in Pennsylvania and this latest trip at the Charles Deam Wilderness. Planning to do many more!

I made the decision to tell my kids the truth after I was diagnosed. It was tough. They of course asked “Mom, are you going to die?”. They knew that people died of cancer.

At the time I’d been told there were no treatment options. I wanted to continue to be honest. I’d read the stats in regards to signet ring appendix cancer. From what I’d read at the time, it appeared long-term survival was only 10%. I didn’t know if I was going to die. It actually seemed rather likely.

It was the best answer I had, and it was an honest answer.

I knew what would happen next, that they would go to school and tell their friends over lunch that their mom had cancer. They did, and their friends told them of relatives and people they knew who had died of cancer. Since we were all being honest and open, we were able to talk about those lunchroom conversations at home.

I guess there are some good things about having a cancer that is rare. For my kids, it gave them hope. They understood that people died of many kinds of cancer, but they couldn’t find a single person who had died of appendix cancer.

What do we tell the kids?

Over the past year since I’ve gone on-line with my story and web site, I’ve heard from over 200 people newly diagnosed with appendiceal cancer. Almost all of us are diagnosed as Stage IV. We all have advanced cancer.

I have been in contact with many women who are mothers still raising young children.

When I was diagnosed my kids were aged 10 and 11. All I wanted and prayed for was to be alive long enough to raise my kids to adulthood. To see them turn 18, to see them finish high school. If I only lived that long I would see my life as full and complete. I did not want to abandon my children. I did not want to cause my children that pain. Some women I communicate with have children who are infants and toddlers, they only hope to live long enough for their children to be able to remember them.

At some point we have to make a decision about what to tell our kids. Mine were told the truth early on. They knew from the beggining, even before they were told, that something was terribly wrong. I’d had surgery before, this time was different. The phone rang off the hook, their dad was crying. It was the first time my kids had seen their dad cry, “He sobbed, Mom, he was really crying”. Suddenly there were lots of messages on the answering machine every time they came home. For the first time my husband asked my kids to pray with him because mom was really, really sick.

I’ve know some who have decided to minimize the details, to spare their kids the truth. “Mom has a really bad tummy ache and the doctor is going to try to fix it”. I know of cases where that has backfired. One five year old approached his mom one day and asked “Mom, do you really have cancer??” I think if kids don’t overhear conversation, they still know something is terribly wrong in their home.

I’ll talk more about how my kids handled this in my next post.

Today is the 4th of July, Independence Day in the United States. I am just back from enjoying our local fireworks display with my husband and kids.

Independence Day is about freedom. A cancer diagnosis, with all of it’s negatives, does grant some new freedoms.

For awhile just after my diagnosis, it was assumed I was terminally ill. On a plane to New York City, I suddenly thought of how cool it would be to FLY the jet airliner I was on. Wouldn’t it be a rush to be in control of the plane, to be actually FLYING the plane? Before cancer I’d been afraid to be a passenger on a plane, I used to be afraid of dying in a plane crash. When I thought I was dying anyway, I suddenly got bold– potential death was no longer a deterrent. I suddenly thought flight school might be great. I was free of my fear of flying.

I also suddenly lost my fear of playing piano publicly. I now play piano professionally for hundreds of people. Now it’s not a big deal if I make a mistake, I just keep playing. Before cancer a mistake made publicly would stop me cold, I’d panic and be unable to play until I started the song again from the beginning. Thanks to cancer I am now free of that fear, I no longer have stage fright.

I also became free of my fear of death. After looking death in the face over and over for days, months and years, I’ve come to accept it on every level. I fine-tuned my faith, I gave all of my trust to God. Now death to me is just a door to a new beginning, a temporary separation from those I love. It will be a transition to a place where things will be right, where I will be home, where my body will forever be whole. I totally trust in an eternal life, now I look forward to Heaven all of the time.