I just returned from Baltimore.  Was a great trip.  I met several appendix cancer survivors, some of a year or less, others longer term survivors.

Sunday was the day of the walk, and I was SO inspired.  I don’t know the exact numbers yet, but I think 800-900 attended.  The walk was SO well done.  It’s a beautiful walk in Baltimore’s Inner Harbor.  The walk offered DJ assisted dancing before and after the walk, an exercise coach led before-walk warm up exercises, there was plenty of bottled water and snacks for the walkers, and an opening talk by Dr. Sardi . I was called to the stage by him and had handed a microphone. Had to do an impromptu short speech!  Caught me off-gaurd, but I was glad to do it!  I had a booth for the Appendix Cancer Connection, and the PMP Research Foundation and PMP Pals were represented at the walk also.

Here are some pictures! 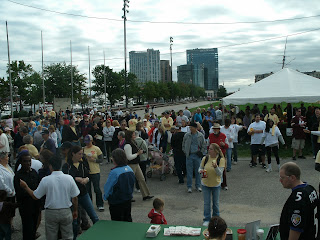 Registration before the walk….lots of people! 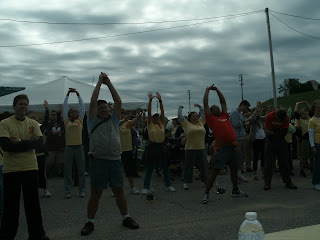 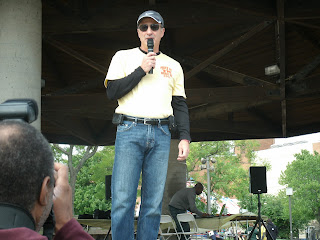 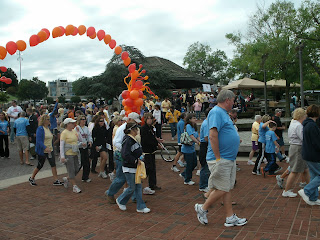 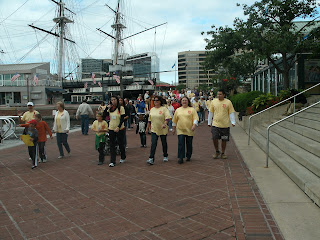 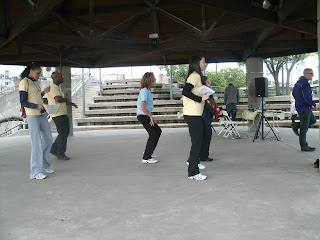 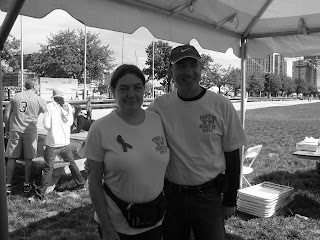 B&W photo of me and Dr. Sardi!

The walk was terrific!  I hope you are able to come next year….like me, you will be inspired!

I’m in Baltimore for the 2nd annual Heat it to Beat It walk!  I’m getting better at knowing where I’m going and using the light rail, a commuter train.  The walk is held in the center of Baltimore, the Inner Harbor, but hotels there are very expensive, so I stay near the airport in a nice hotel that is 1/4-1/5 of the cost of an Inner Harbor hotel ad use public transportation to commute.  Only $3.50 buys you an all day pass to use all of the trains and buses…can’t beat that ($40-$50 one way commute to the harbor via cab).  After walking miles downtown today, I attended a very nice and well-attended reception for the walk at Mercy Medical Center tonight.  I got to meet some other great survivors!  One is an 11 year survivor.  She also initially received a terminal diagnosis, and after her first HIPEC surgery it recurred three years later…and she received a second terminal diagnosis.  She had a second HIPEC surgery 7 years ago and has since been cancer-free.  The walk is tomorrow, and so far 671 signed up prior on-line, more signed up tonight at the reception. Will let you know the grand total when I know!  I will post pictures of the walk when I return home (forgot my card reader).

We are approaching the 10th anniversary of Sept. 11.  I read that there may be terrorist attacks planned for the anniversary, possibly car bombs in DC and NYC.  It made me worry, made me feel sad.  I remember how depressed I felt after the Sept. 11th attacks.  I was supposed to be in NYC on Sept. 11, 2001, but instead went there Sept. 5th and 6th.  I saw the Twin Towers and took pictures of them just days before they went down.  I was there again sortly after and visited Ground Zero.  We lost 3000 Americans that day.  The whole country was saddened.

But I think now….I’ve been in the cancer community for 10 years.  We lose 500,000 Americans a year to cancer.  The same as losing 3000 Americans every other day, but we don’t feel the shock and sadness at that statistic as we did the Sept. 11th statistic.  Cancer terrorizes us too.  It is a much bigger enemy.  I think of the saying, “one death is a tragedy, a million is a statistic”, and it really is true.   It’s how our minds work.

I looked it up once, we spend a fraction of the money on cancer research as we do on fighting terrorism.   Makes no sense….

Don’t know if I’m being sappy or indulgent or sentimental here, but please bear with me!

Before my cancer diagnosis, I bought an apple tree.  We’d had a large above ground pool in our backyard, which we’d removed, and I wanted TREES in our back yard to fill the space.  I thought a fruit tree would be nice, so bought a self-pollinating green apple tree.  After a few years, it actually had lots of apples, and they were the best apples I’d ever tasted.  One year, just after my cancer diagnosis, I notices we had a worm problem with the apples, so I decided to spray the tree with insecticide.   A few days after I sprayed it, the leaves started dying, and I realized my mistake…I’d sprayed it with herbicide instead of insecticide.  Soon branches started dying.  I pruned the tree many times hoping that when I removed the dead wood, enough of it would survive to keep the tree alive.  As I did that, I felt I was “debulking” it, much like my own cytoreduction surgery.  In the end, all of the branches died, and I had only a dead trunk.  I cut down the trunk, I’d killed my apple tree. It was gone.

But the next spring, a small shoot appeared where the dead trunk had been.  The tiny leaves looked a bit like my old apple trees leaves, so I tried to nurture it.  The next year the leaves came back again.  Over the next several years, I nurtured the small plant, and it grew to a small tree.  No blossoms, no apples, but I kept nurturing it anyway.  I wasn’t sure if it was a tree or a big weed, but I kept it.

This year, my tenth anniversary cancer-free, my tree bloomed…and it has apples again!  I picked one, and it tasted GREAT!

My apple tree now reminds me that when all hope seems gone, just a small bit of hope can grow.  It can become whole, be fruitful.  That even after devastatingly hard times we can be reborn.

As a side note, I looked at my apple tree today, and many apples were gone, there were only three remaining. Balanced on my fence-top was a half-eaten apple. We have raccoons and squirrels in my yard, and they never cared about the apples before, but now my apple tree seems popular!!  But I don’t mind…..I think hope is something to share.  As long as they leave me a few….