I read an interesting article in the Chicago Tribune today, click the link below to read it:

This graphic was included in the article: 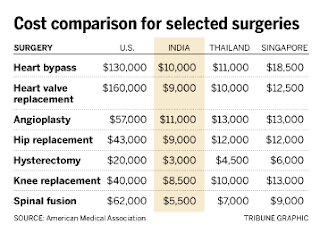 I remember reading about that before, and being aware that some people travel overseas to obtain comparable quality medical care for a fraction of the US cost. In many cases, paying cash for a procedure overseas is cheaper than just the insurance copay cost for a procedure performed in the US. In the Chicago Tribune article, an uninsured 55 year old man who needed a liver transplant and couldn’t afford the $450,000 price tag in the US went to a premier hospital in India and paid $58,000 for the same surgery. The price including his 10 week hospital stay. I would love to know the cost in India for cytoreduction surgery and HIPEC if it is offered there. I wonder if that would be an option for those in the US who are uninsured or whose insurance denies payment for the procedure.

Apparently insurance companies are starting to pay attention to details like that and some are offering first class transportation and lodging for those willing to have procedures performed in other parts of or outside of the US.

There are other ways to save on medical costs. I tried to watch dates to stay within annual deductible dates and annual out-of-pocket expense limits. I also kept track of procedures, dates and insurance payments. I saved over $10,000 in billing errors I discovered in addition to double billings, insurance failure to pay for covered procedures and charges that I challenged the insurance company about until they agreed to pay. It took me many hours of phone calls and being on hold, but at $10,000 savings, it was well worth my time.

A cancer diagnosis and treatment is stressful enough, but the costs of medical care can cause additional stress when combined with a loss of income for those who are sometimes unable to work for several months.

It really pays to be a careful consumer in the medical world.